Each time during the chip-off data recovery, after the physical image extraction, and before any further step, it's necessary to check the quality of the dump. Due that memory chips are being read physically, the extracted dump may contain defects. In some cases, we can observe that one physical plane is damaged, in other cases, we have a lot of bit errors in the dump. And also, we can distinguish another type of defect that is common for modern NAND memories, these are bad columns. Bad columns or bad bytes are places where a plane of NAND memory crystal is physically damaged/breached and data can't be written and stored on these particular offsets/bytes.

When the controller is recording user data to a memory chip, it has to select the crystal (CE) to which data will be sent, then it sends the page program command and starts data transmission. Typically memory chip consists of 1/2/4 or 8 identical crystals. Memory crystal, as a whole, isn't a unit where just user data is stored permanently, it consists of peripheral devices, page buffers, page decoders, and planes. Physical planes are arrays of memory cells that are composed into pages and blocks and this is the exact place where user data is written and stored. In the same way as memory chips, NAND crystals may consist of single or multiple planes. The most popular is 2 planes, but we can distinguish also crystals with a single physical plane, 4,8, or even 16 planes.


In the presented example, we have a single crystal with two planes where there are bad columns. Each plane in crystals of NAND memory consists of hundreds of blocks, and each block consists of multiple pages. Bad columns are affecting the whole plane in a particular position, so all blocks and pages inside the plane will be damaged on this exact position/byte. 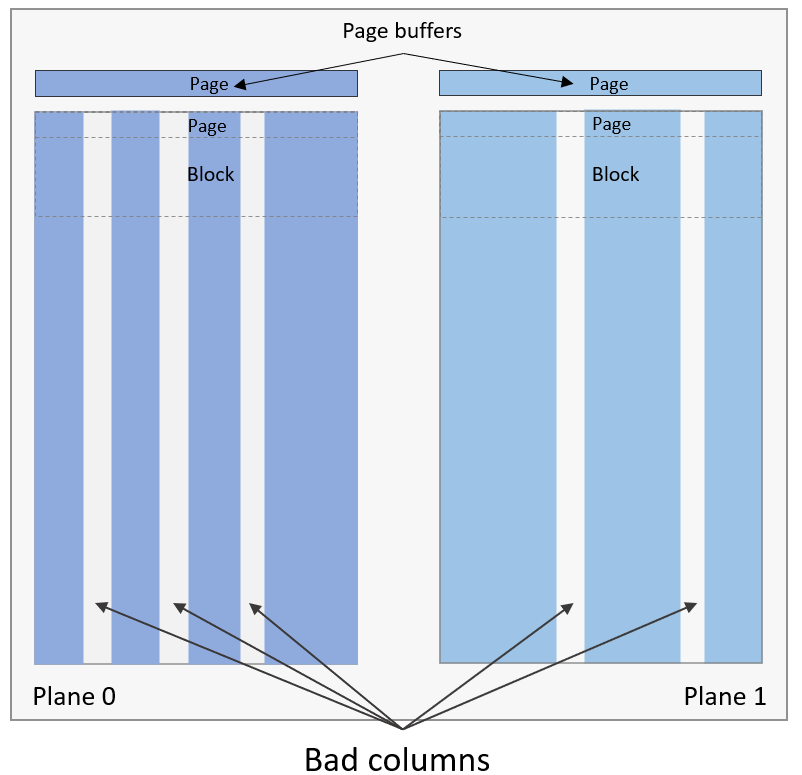 
When a controller is preparing a page to send to NAND memory, postilions of bad columns are being filled up with some HEX values. I n many cases, these values are static and very distinctive compared to the other recorded structures, like ECC areas or especially Data Areas. The pattern of bad columns depends on the controller model and vendor, however, in the majority of cases bad columns have two typical binary patterns. The most popular are 0xFF and 0x00. In some specific cases this pattern can be slightly different, but usually is static and not related to a type of data recorded by the controller.

Both these, mentioned above, examples are typical for majority controllers, like Silicon Motion, Phison, Toshiba/SSS, Sandisk, and for some Alcor Micro as well.

These bad columns don’t have a static pattern, like the majority of cases, but their patterns are highly dependable on recorded data. Recognition of them, via Bitmap viewer, is barely possible, since the pattern of these columns is the same as the recorded data. Similarly to other controllers, Alcor Micro fills positions of bad columns with some values, in that different that these values aren't static. These controllers are replicating bytes of data, from the buffer, onto the bad column position. This means that when the controller is composing the page in the buffer, the position, where the bad column occurs, will be filled out with the former byte from the buffer. Therefore, as a result, in Bitmap, we can spot places where several columns in a row have exactly the same hex values/pattern and these are the exact places where bad columns are present.

More information about XORed bad columns, their detection, and removal is widely described in this article: Alcor Micro(AU) controllers - Peculiarities of data recovery.

There are some exceptional cases where bad columns are completely invisible through bitmap or hex viewer. Such cases are really rare, however, we've seen them several times in rebranded Phison controllers and some SiliconMotion. A simple solution for their removal isn't available, but we are offering assistance with their removal for premium support users via Help Center.


In the majority of cases, bad columns are noticeable in the dump, due to their special pattern, therefore it's possible to check if they are present by going through the bitmap of an extracted dump.


To correct the dump it's necessary to find the ECC. ECC can only be detected on the dumps which don't contain bad columns, therefore it's possible to check their presence also by detecting ECC.


Making a page layout is an initial step of recovery and also it may help you to distinguish if bad columns are present or not, especially in case they aren't visible and ECC wasn't detected. In cases when bad columns are present, in the dump, setting page layout isn't possible since set structures will not be corresponding to structures in the dump, like in the example below.

Bad columns are defects that occur inside the physical planes of the NAND memory crystal where all user data is stored. In the same way, as the controller does, VNR reads data from memory crystals by physical pages, therefore in obtained physical images bad columns may be present as well, and in such a situation, it's necessary to remove them.

The bad column remover element has three sets of parameters, from which only the Number of Planes should be checked and configured.


These parameters are the following:

Each NAND memory crystal may have either two or multiple planes inside and for each of these units, the amount and distribution of bad columns are individual. Therefore the number of planes can be determined also by checking positions where bad columns are present. Bad columns in physical blocks from one plane will be in different positions compared to the other planes.


In this example, bad columns are in the same positions, every second block, which means that in this case, we have 2 Planes.


Usually, the number of bad columns inside the Planes is different, and because of that, it's also possible to determine the number of planes by checking the end of the page. This method is very useful in cases when bad columns aren't visible.


There are cases when the second plane is damaged or not used by the controller. The majority of AlcorMicro controllers for instance allocate data at first to the first plane and then to the second plane. In case a device wasn't fully written with data, the second plane may be empty, so filled only with 0xFF, like in the example below.

When the number of planes has been checked and configured in the next step positions of bad columns should be determined and marked.


Select the BCR element and click Edit, to open the environment. 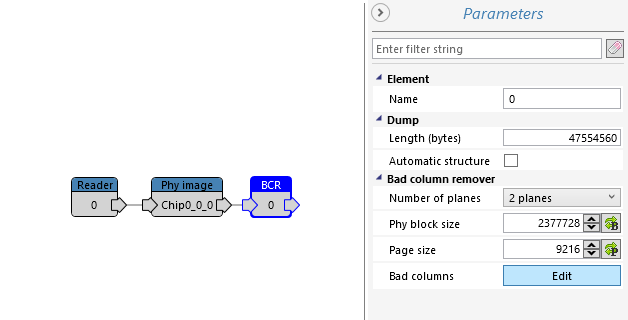 In the first step, it's necessary to choose the preset which consists of a set of rules and filters used for the bad column autodetection. Depending on the controller bad columns may have slightly different patterns/values, therefore there are presets for each popular controller vendor. The preset  also determines if autodetection will proceed for each plane automatically or not. Controllers like Phison, Sandisk, or SiliconMotion are using Multi-Plane Page allocation mode which allows processing bad column analysis and removal automatically on each plane without the risk of choosing an inappropriate block for analysis. For Chipsbank and AlcorMicro presents, autodetection is processed on Single Plane due to the Single-Plane page allocation mode used by these controllers. Single-Plane detection is also enabled for Universal preset.

When preset has been selected it's necessary to locate a block inside the dump viewer where byte columns will be analyzed. Due to that bad column remover operates on bit statistics it's necessary to find a block with noise/randomized pattern for analysis, in order to detect positions of bad columns.


Bad columns occur mainly inside the TLC chips, which are always XORed. As a result, most of the blocks in the dump have noise patterns and completely "randomized" data. Wherefore conditions and settings of our presets are optimized to work with exactly such blocks. 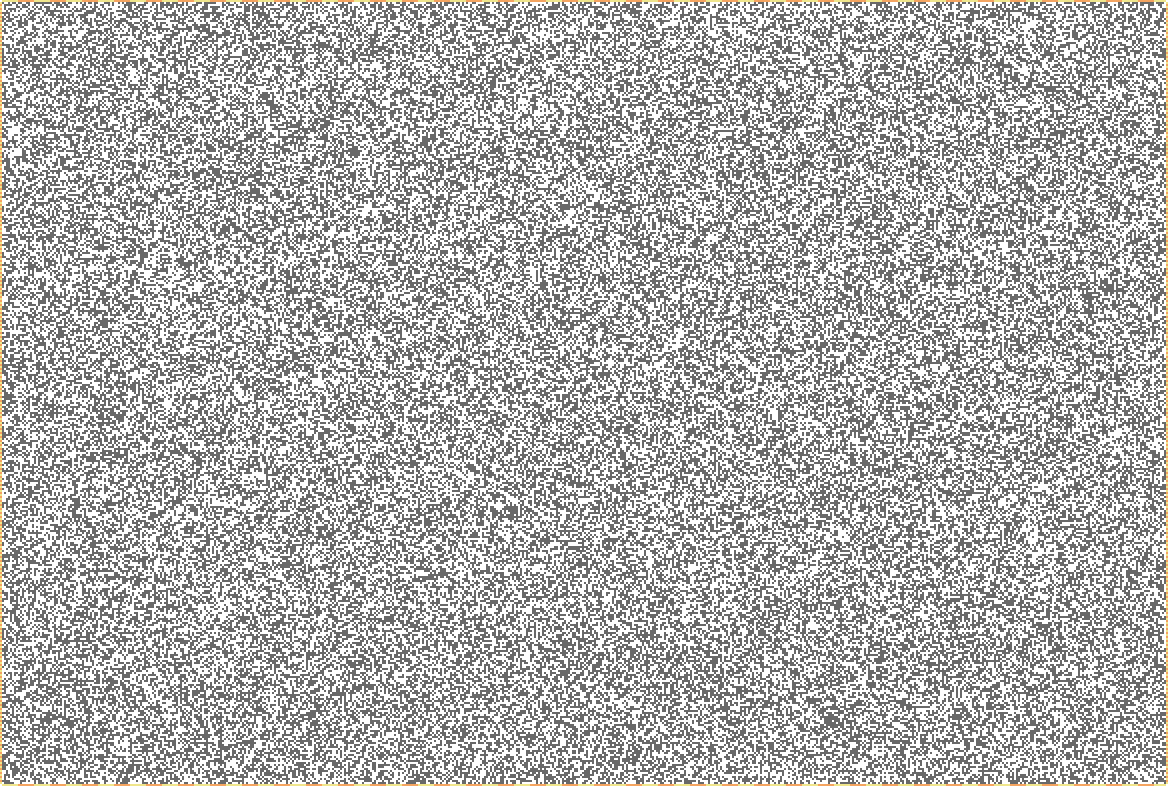 When the block has been found, select it on the bitmap viewer with LMB, and press the "Run autodetection". The tool  will read statistics from the selected block and automatically compare and filter them against rules from previously selected preset. If the byte statistic will meet bad column conditions, then such byte will be classified as a bad column.

When all bad bytes have been found, it's possible to mark them as bad columns. To do that click Add all bad columns.

After all bad columns are marked it's necessary to repeat the removal procedure for the next planes in case that Single-Plane preset was selected.  To do that switch the Current Plane from View settings.


Bad columns can be also marked manually on the bitmap viewer with a combination of Shift + LMB and unmarked with CRTL + LMB.


Page structures of each controller are periodic and each structure has exactly the same size, therefore it's easy to simply assign page layout and check if it corresponds visually to set structures. The easiest way is to check Services areas, in case these are available. 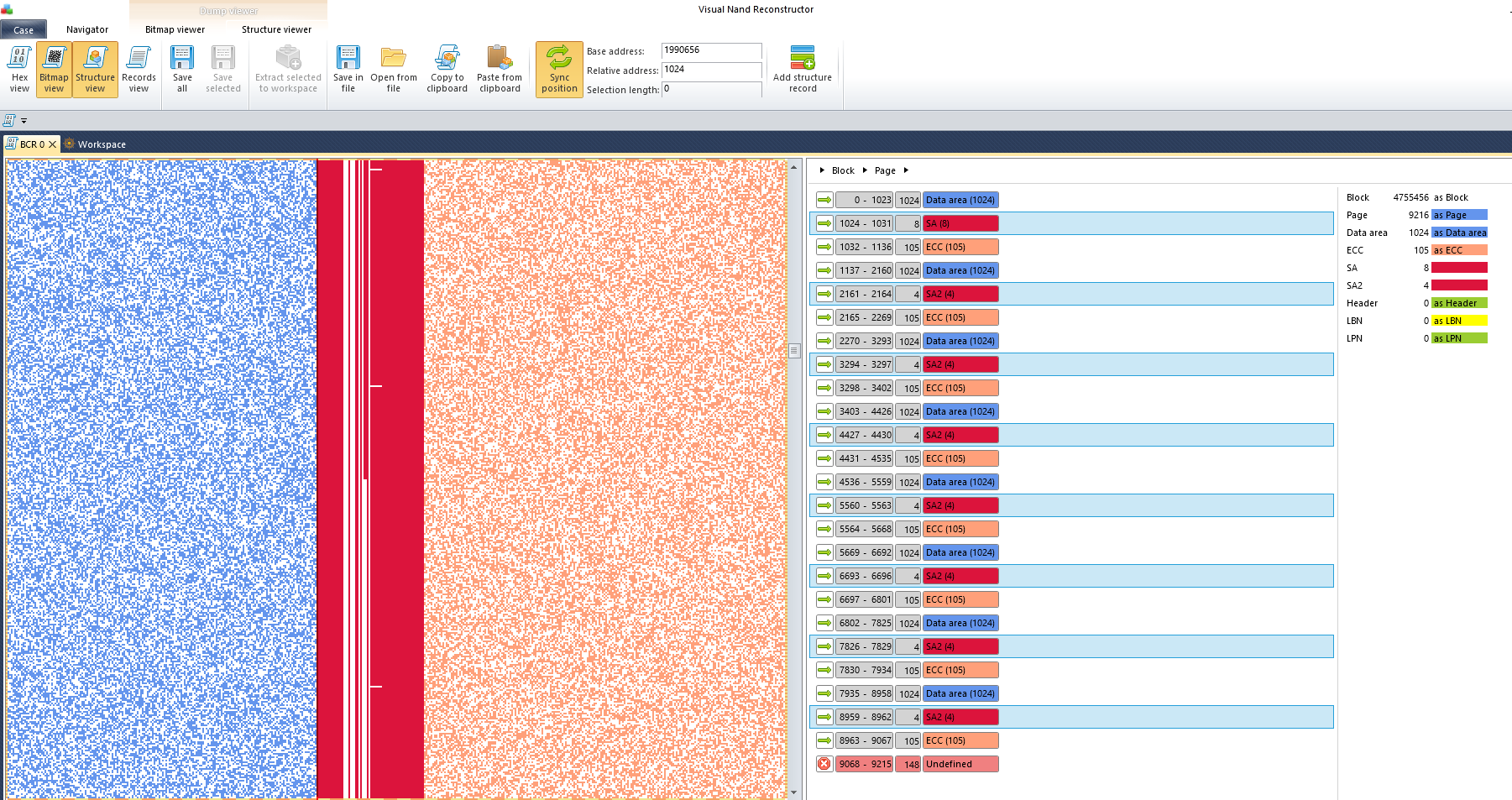 In a situation when the page layout isn't corresponding to page structures, like in the example below, bad columns shall be analyzed once again. 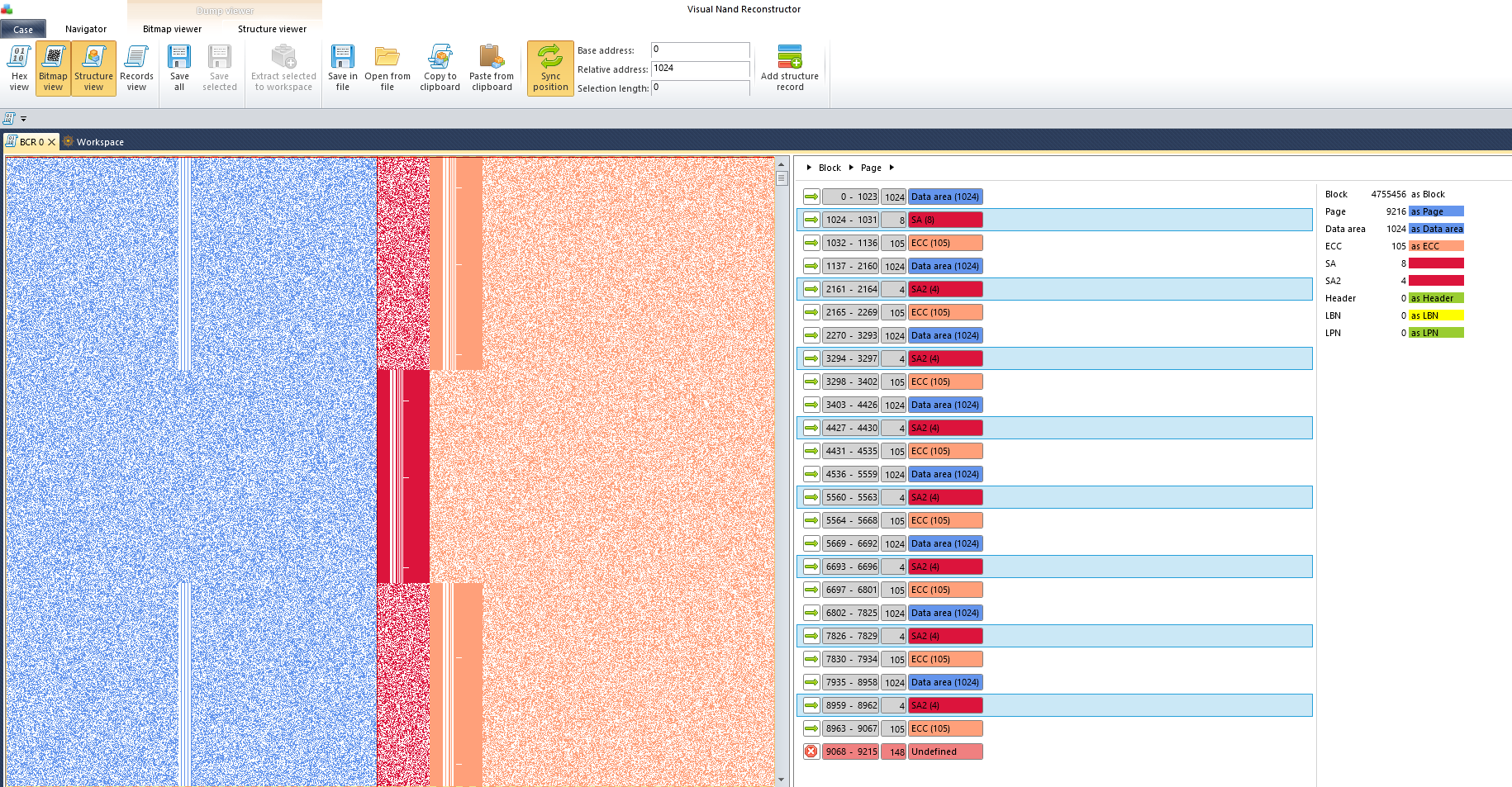 In case when bad columns were present in multiple planes, it's necessary to check the structure in a few neighboring physical blocks.

Detection of the ECC


Each BCH file that is located in the VNR BCHCodewords database is designed to work with a particular page structure, therefore in case when not every bad column was removed or there are some remaining false positives, the such file will not be detected. 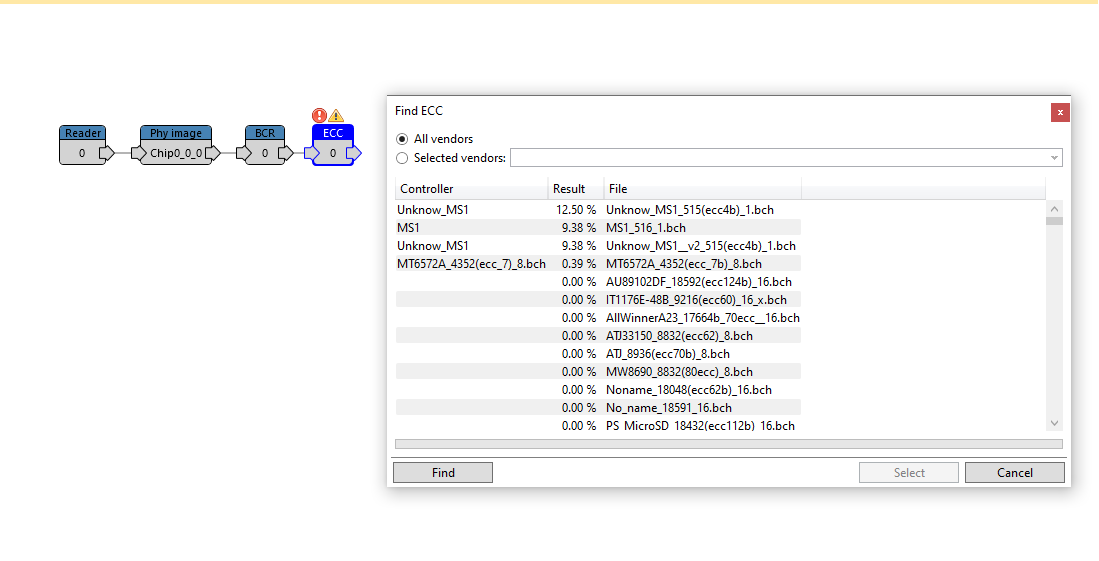 When the file has been detected and the ECC map shows correctable/good pages it means that ECC is working and bad columns have been removed correctly.

For the cases with bad columns in multiple planes, it's necessary to check if correctable pages are available in a few neighbor physical blocks in the ECC map, like one example below. 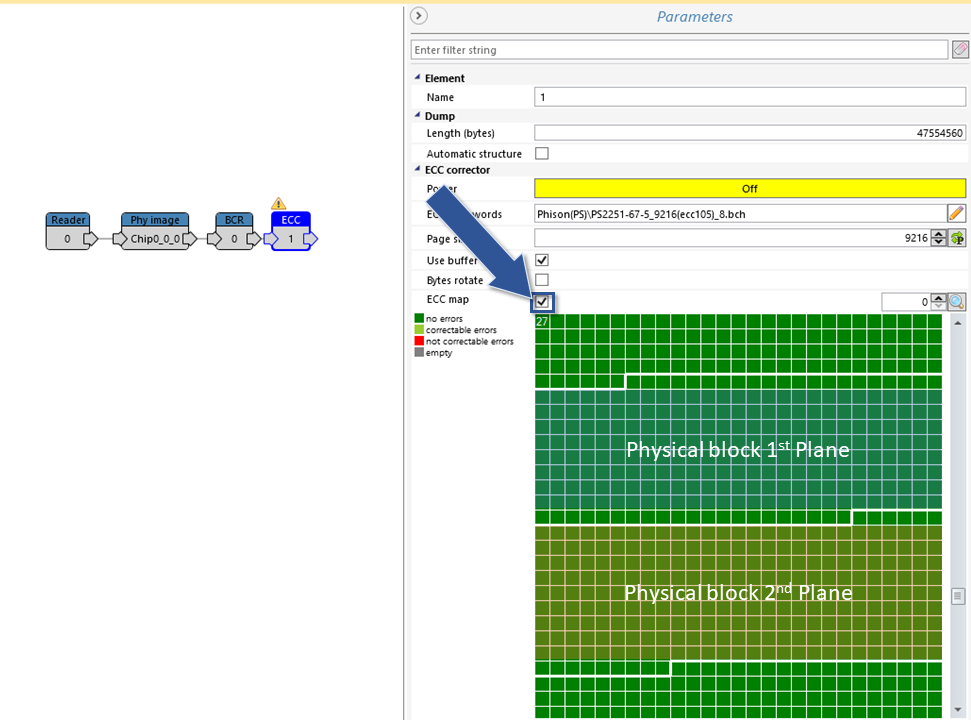 The distribution of physical blocks in the ECC map is the same as on the dump viewer.


In the case when bad columns were removed incorrectly, ECC map will display only red pages for physical blocks from this exact plane. 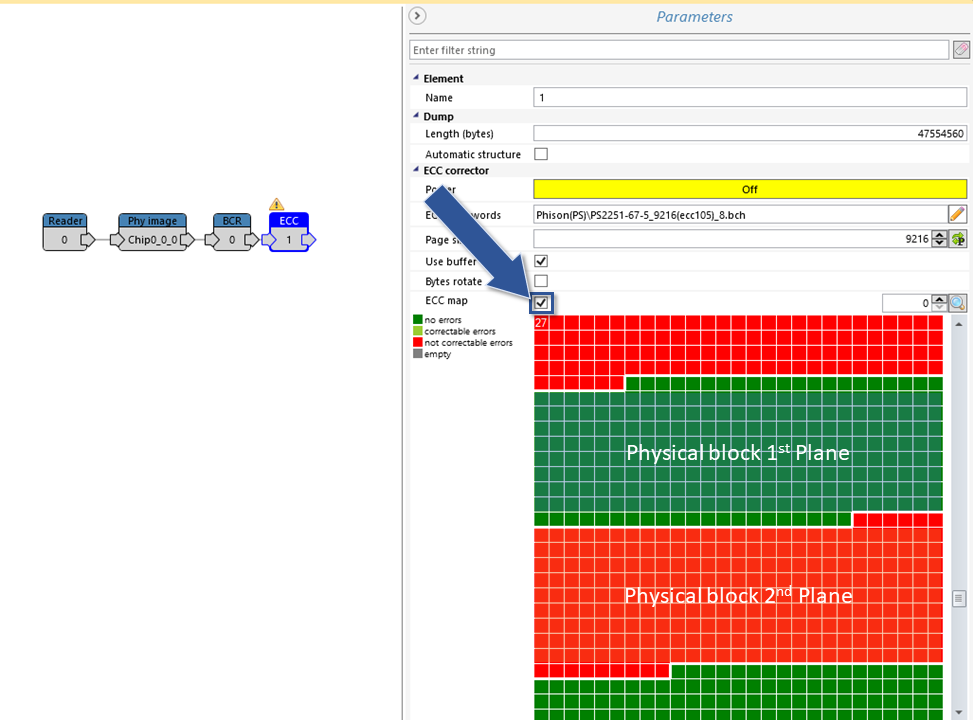 More information about ECC design and detection is available in this article:   ECC in NAND flash memory .