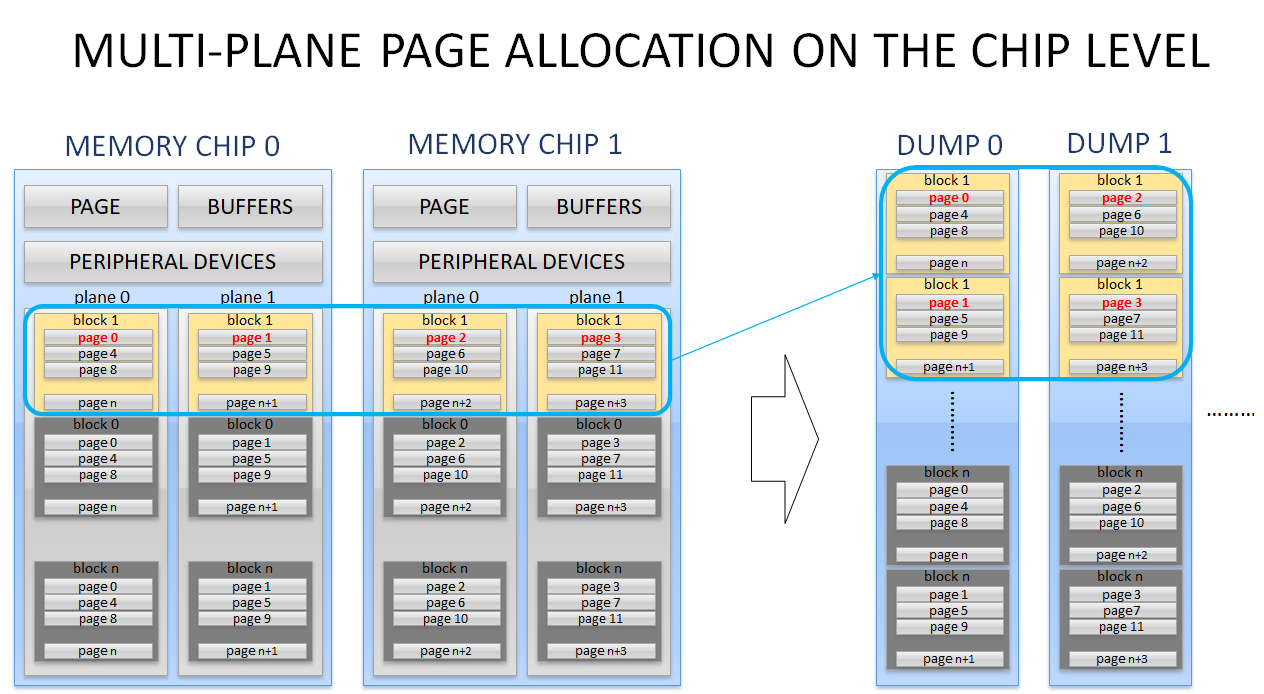 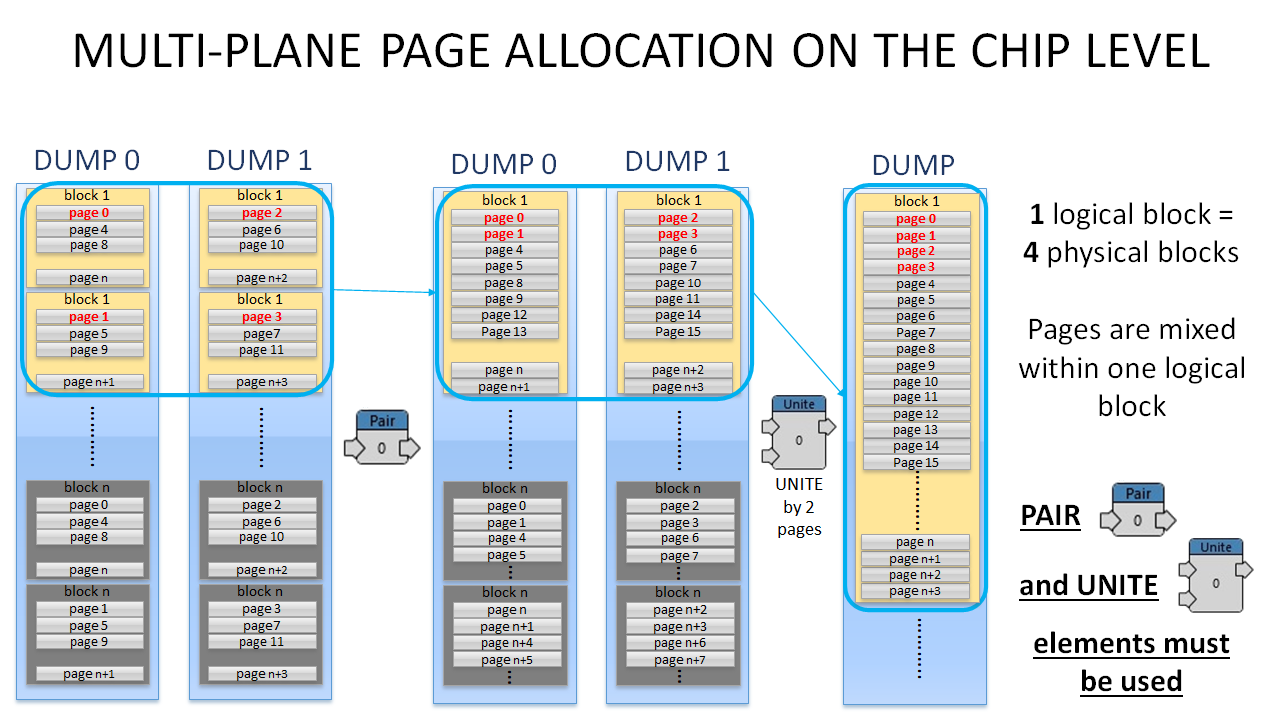 More about standard Multi-Plane Allocation here.
Asymmetric Multi-Plane Allocation
Asymmetric Multi-Plane page allocation is working in a similar way- one logical block is built from physical blocks from all planes. Usually, 80-90% of blocks are allocated in the standard way, but the rest may be built from physical blocks located by different offsets in the planes. And if such a block will be reconstructed in the standard way, it will be wrong, data will not be available there. The worst thing is that usually the file system blocks are written in the asymmetric manner, so the standard approach does not allow to get the file structure. 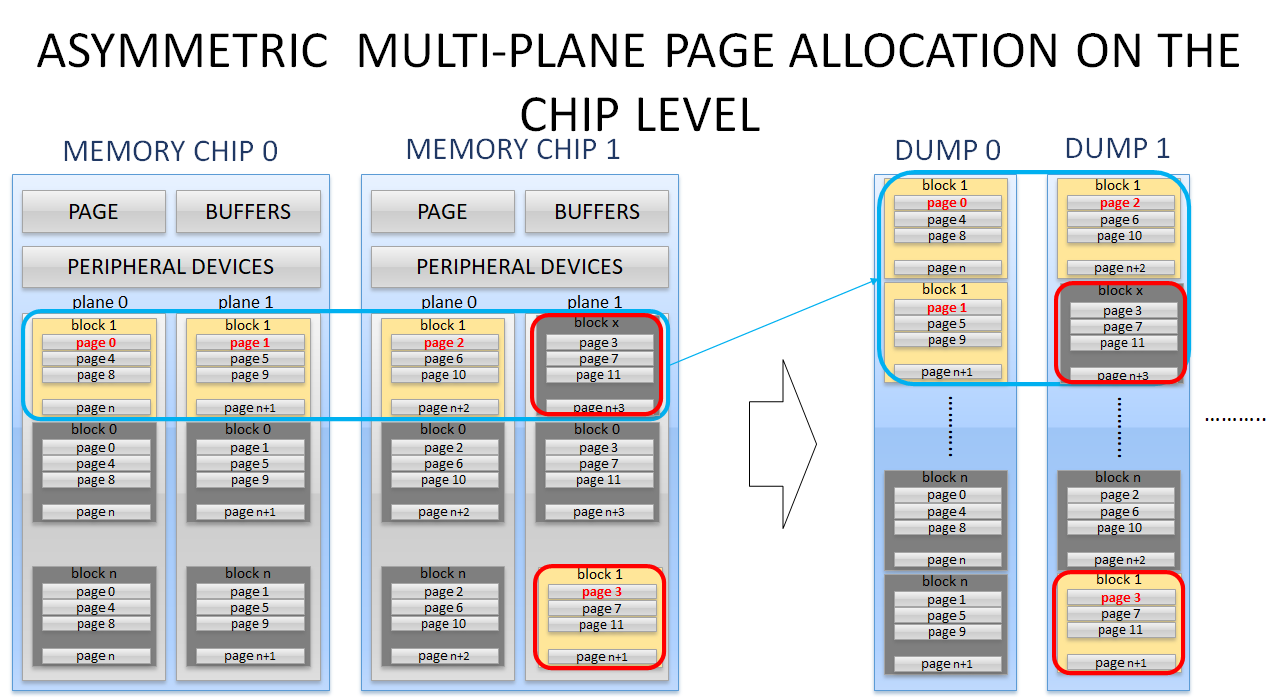 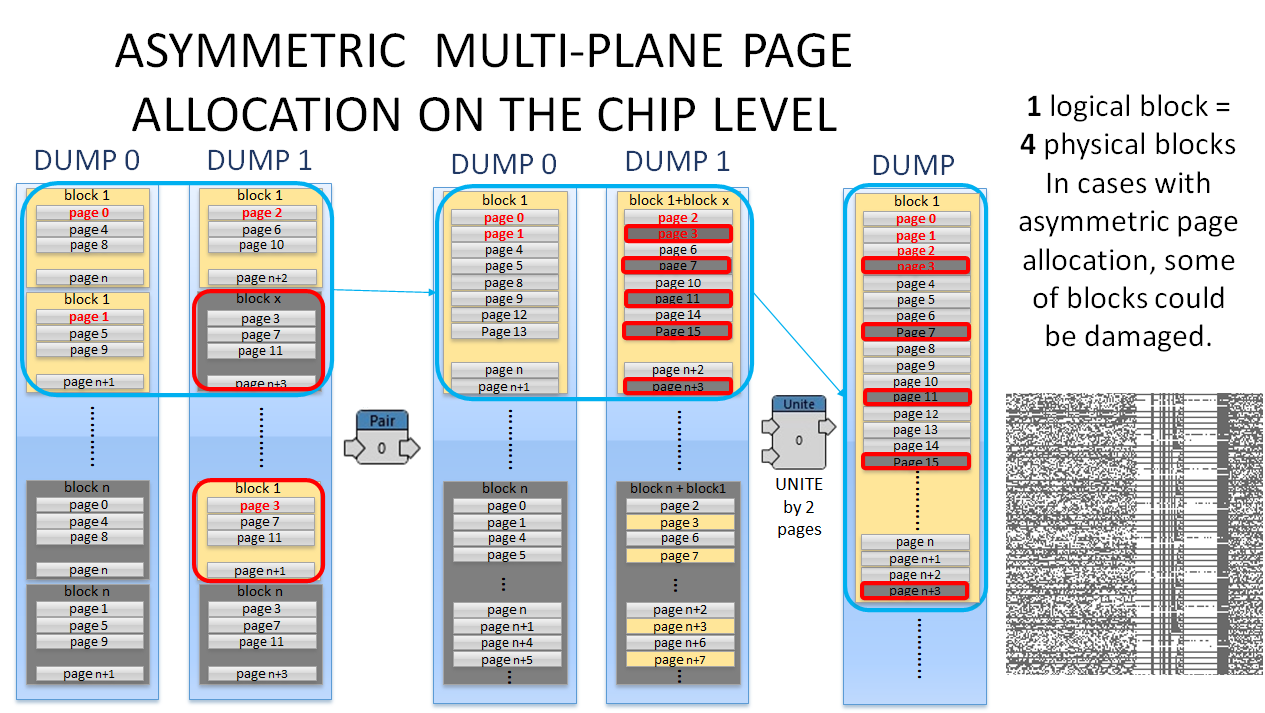 As it is shown, it corrupts data.

The good news is that VNR can rebuild the full image in the correct way, the step-by-step instruction is below. 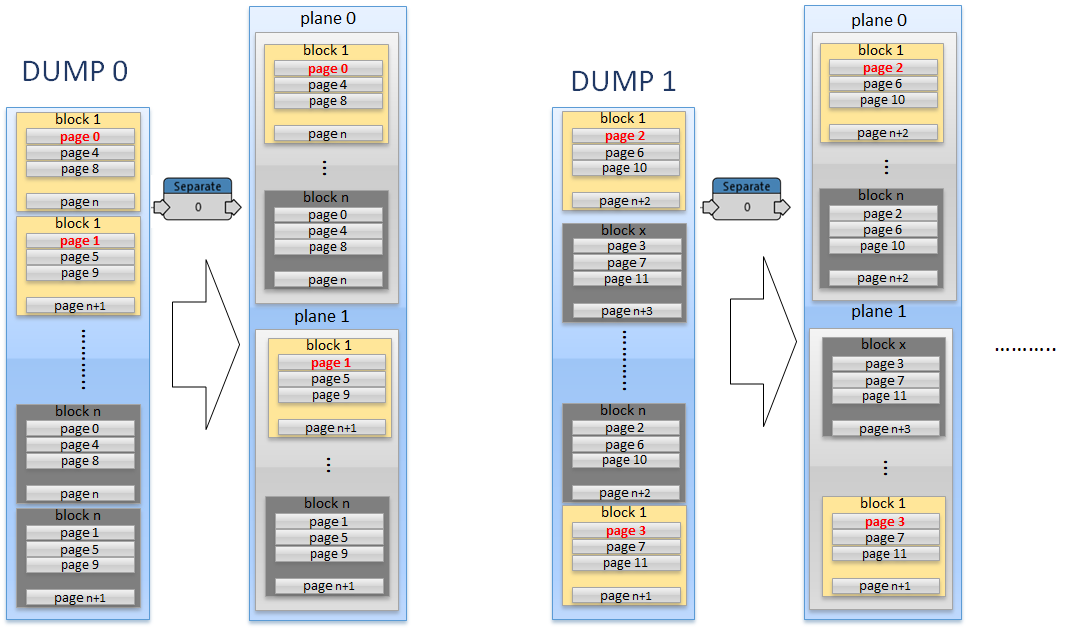 So now all blocks from each plane are grouped together.

In the next step, it is necessary to unite dumps with the UNITE element. So we gonna get a single dump with 4 parts. Each quarter contains physical blocks from minimal to maximal LBN from the corresponding plane.
After that, the Markers table with 4 banks will be used to arrange blocks in ascending order. 4 banks should be used to keep grouping of the blocks by planes. After this there will be a dump where the first quarter is taken by blocks from the first plane and all of them are arranged in ascending order, the second quarter is taken by the arranged blocks from the second plane, and so on.
Of course it is essential to add the bank number to the Markers table according to the number of planes that are inside the UNITE element, so if we unite two dumps with two planes, the number of banks is 4, for two dumps with 4 planes the number of banks is 8, and so on…

The Markers table has the standard operations except one thing that is necessary to watch out.
All Banks have to have the same number of blocks.

After sorting, selecting, and inserting missing blocks in the Markers table, the Arranger element is in use. 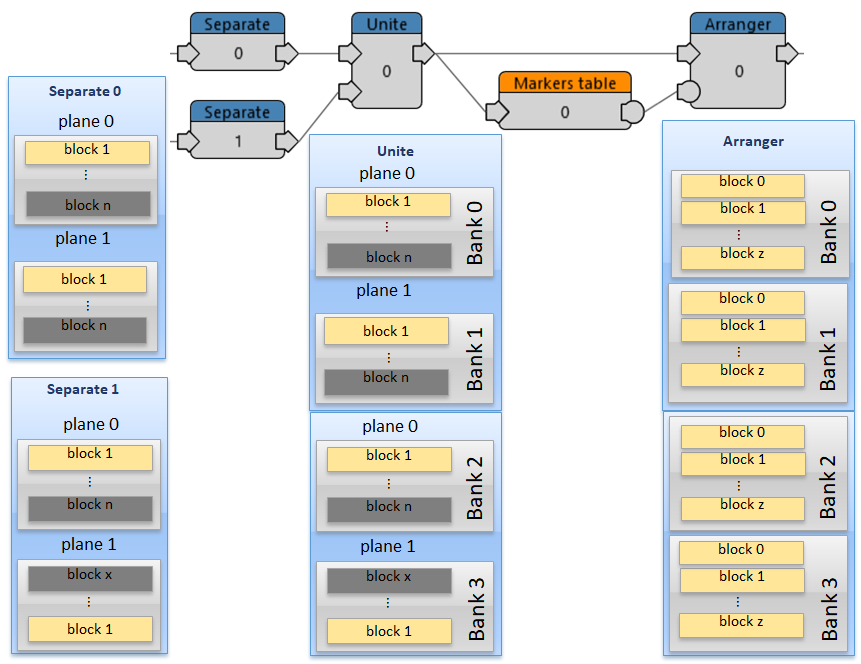 Ok, so now there is a dump where 4 banks with blocks are allocated sequentially in each. So there is Block 0 in the first position in the first Bank, Block 0 in the first position in the second Bank, and so on. And if you remember Multi-Plane page allocation theory, the pages were written simultaneously into all those 4 blocks. Now the task is to gather pages from 4 Blocks from 4 quarters to make PAGEs go sequentially. The PAIR element will be used for this. 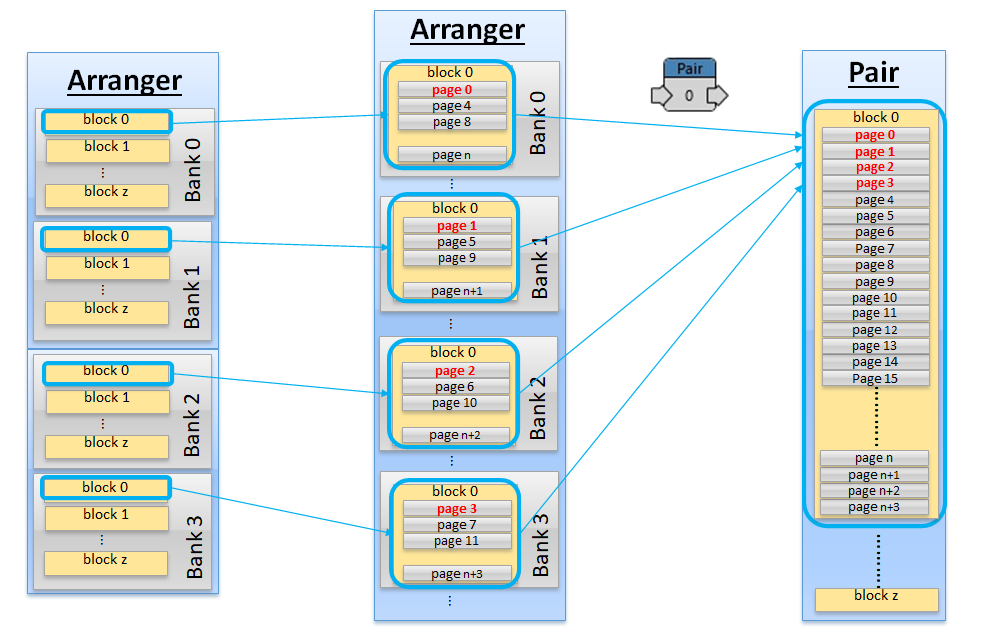 After those steps all blocks and pages inside them are in the correct order, the last step is to use the Data Area element to extract the full Logical Image.

Example on a real device:

On the first look, it is a standard PS-2251-07-V with multi-plane allocation, but after the PAIR and UNITE the first block with FAT table is damaged. In the bitmap, we can see that every 4th page is damaged. The file structure is not available now, but this pattern of damage is a clue for asymmetric multiplane allocation. 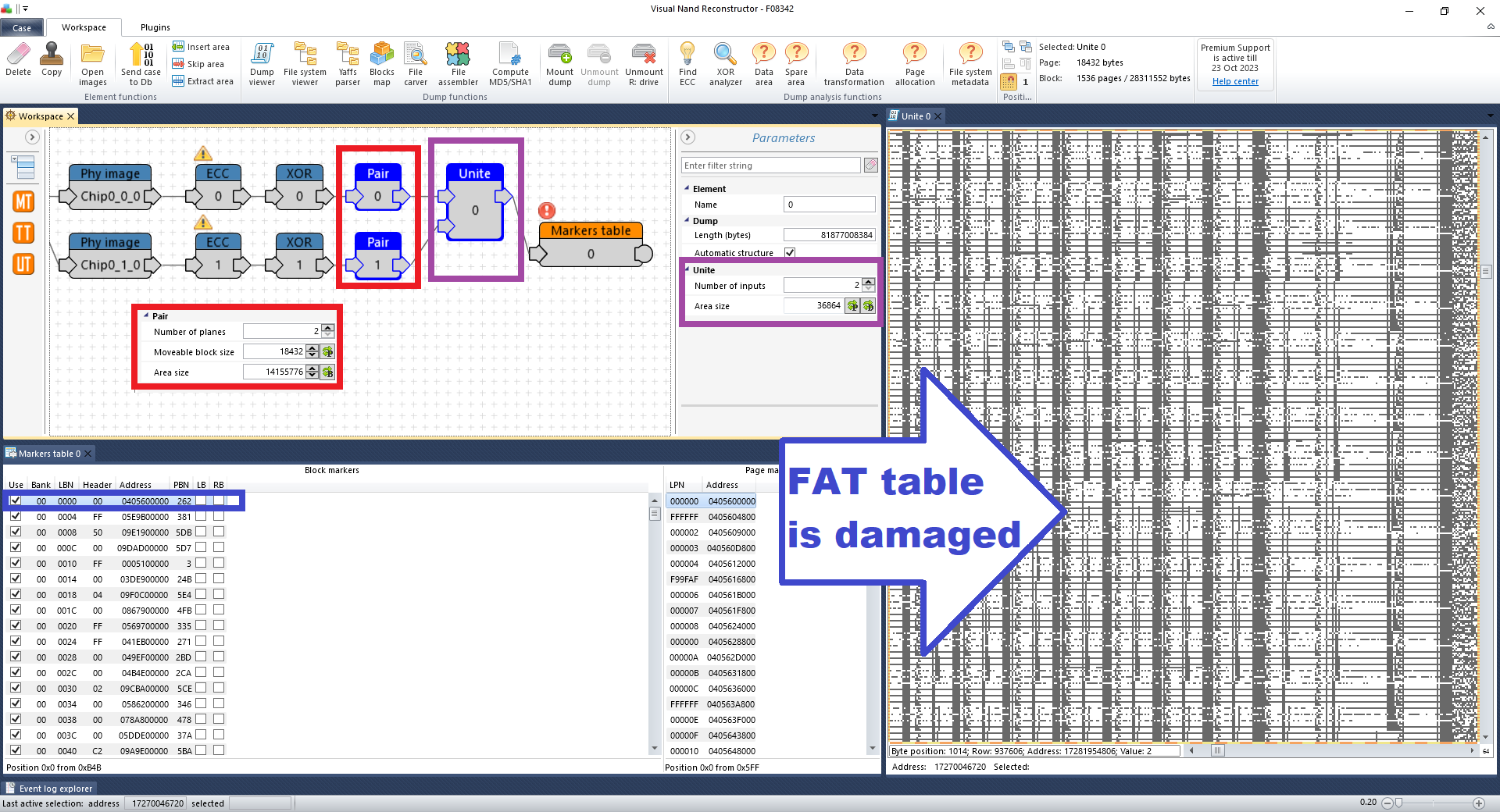 The first step to solve this case is to separate planes inside the dumps.
This element is used after the XOR. After this, the separated planes should be united with the UNITE element by dumps.

Then it is necessary to create a marker table, and the essential here is the bank number.
In this case, there are two chips with two planes each, so the number of banks is four. 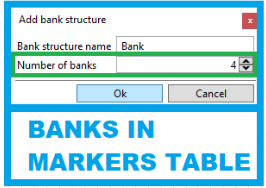 The most important step is inside the marker table. If the number of blocks in one bank will be different this will damage the whole image. In this particular case, each bank has a range of blocks from 0000 to 9894, and the LBN step is 4, all banks have the same number of blocks. 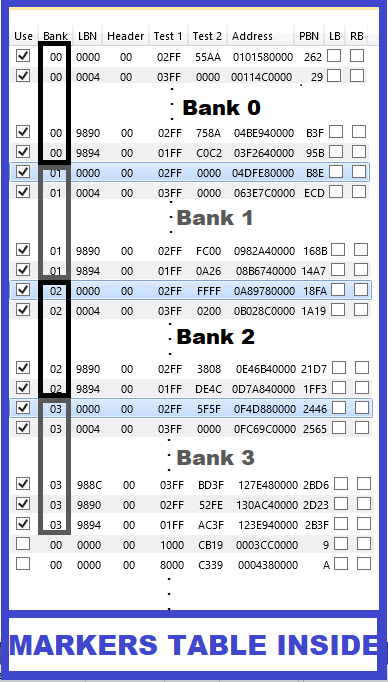 After selecting blocks it is necessary to click “create logical image” on the markers table element, but instead of the Logical image it is necessary to use the Arranger element, because further transformations are required.
When all blocks are extracted in the Arranger element, the Pair should be connected to it.
Settings of the Pair element, are simple- the Moveable block size is defined automatically (this is page size), the number of planes is the same as the number of banks of the Marker table.

The area size is the size of the whole dump. 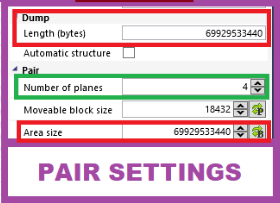 After the Pair, the Data area element should be connected in order to extract the data area. Now it has is fully correct logical image and the file system is available: 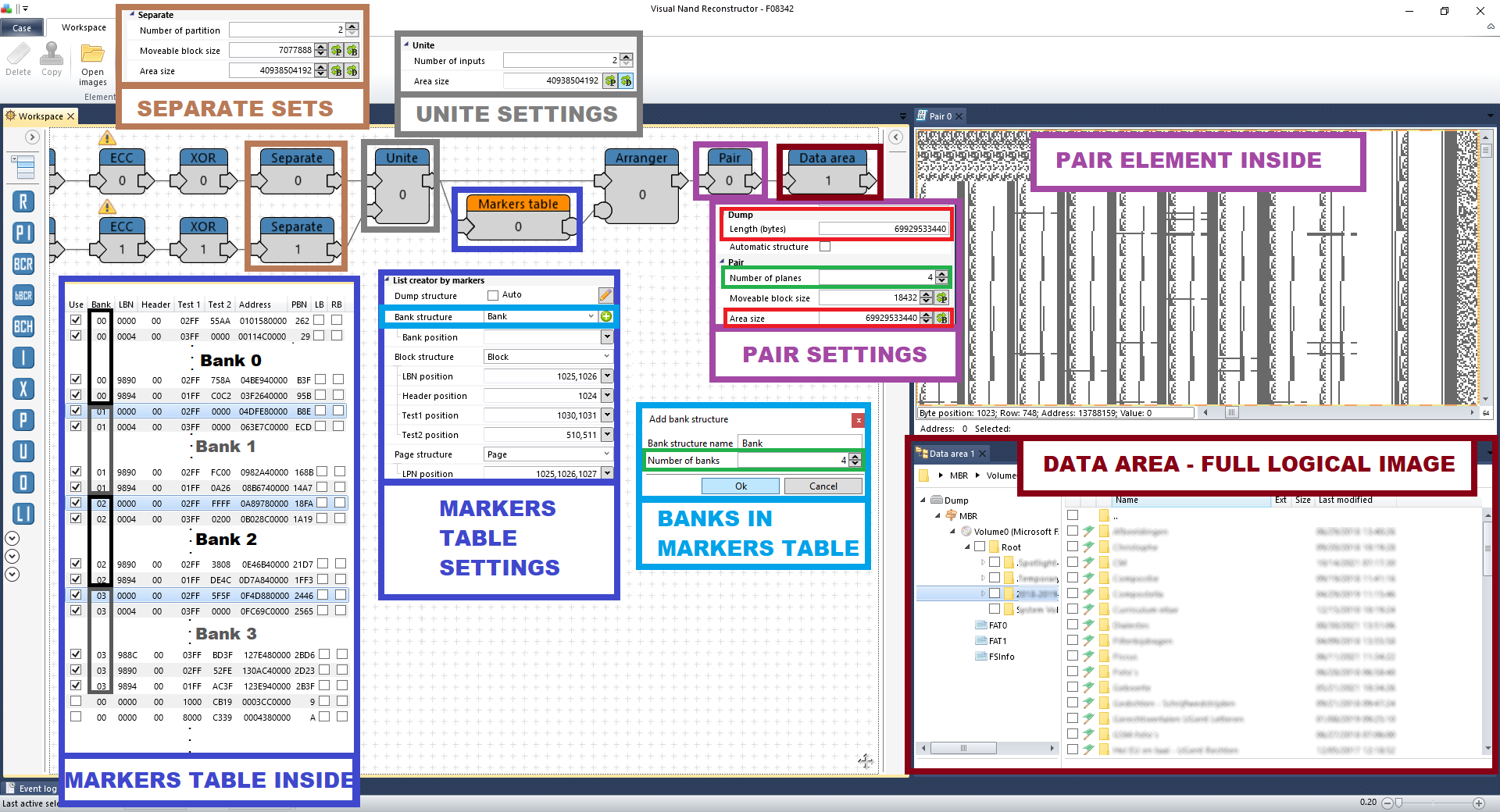 The number of asymmetric blocks is below 10% in devices with this issue, but if at least one of the first blocks is allocated in the asymmetric way, then the full dump with the file system is unavailable in a standard way, but as it is shown, with the VNR it is possible to solve it.