The base element of a NAND memory chip is a crystal and each crystal consist of several physical components: there are  peripheral devices which provide I/O operation, page decoding and overall communication between NAND crystal and memory controller. There are page buffers for temporal data-keeping. And there are  planes  where user data is written and stored permanently. Single NAND crystal consists of one, two or four such planes  in a majority of cases .

The controller writes data by pages. It can write them in two ways to those planes: 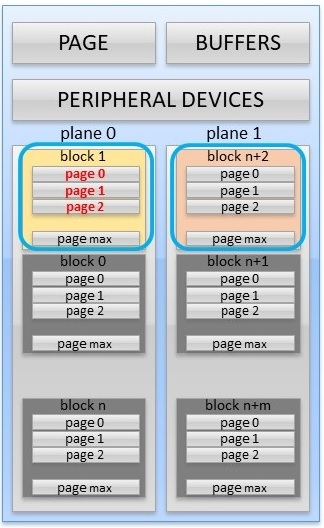 When a device is using Multiplane page allocation mode, pages of data are recorded simultaneously to the physical blocks of each plane. The reason why this mode is commonly used is the much higher speed of I/O operations than Single Plane page allocation. 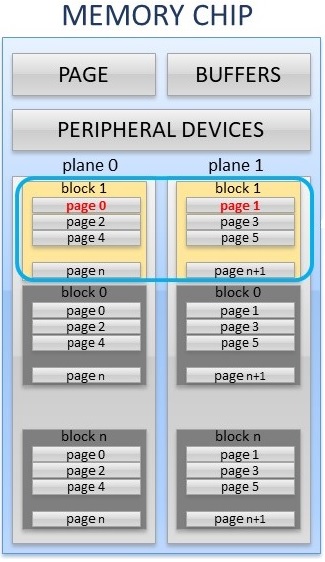 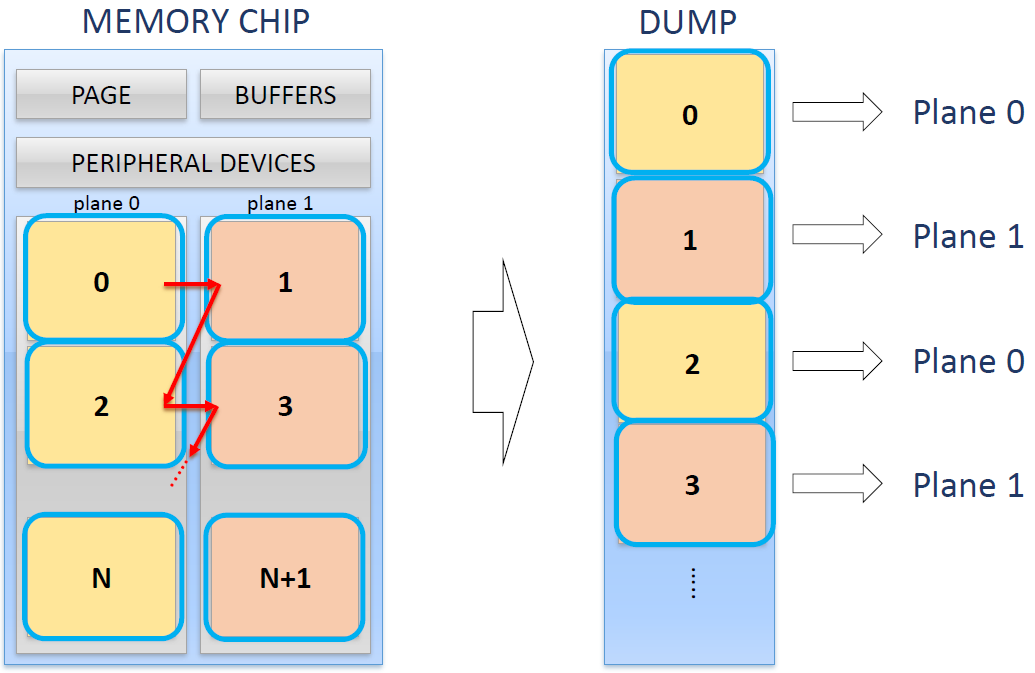 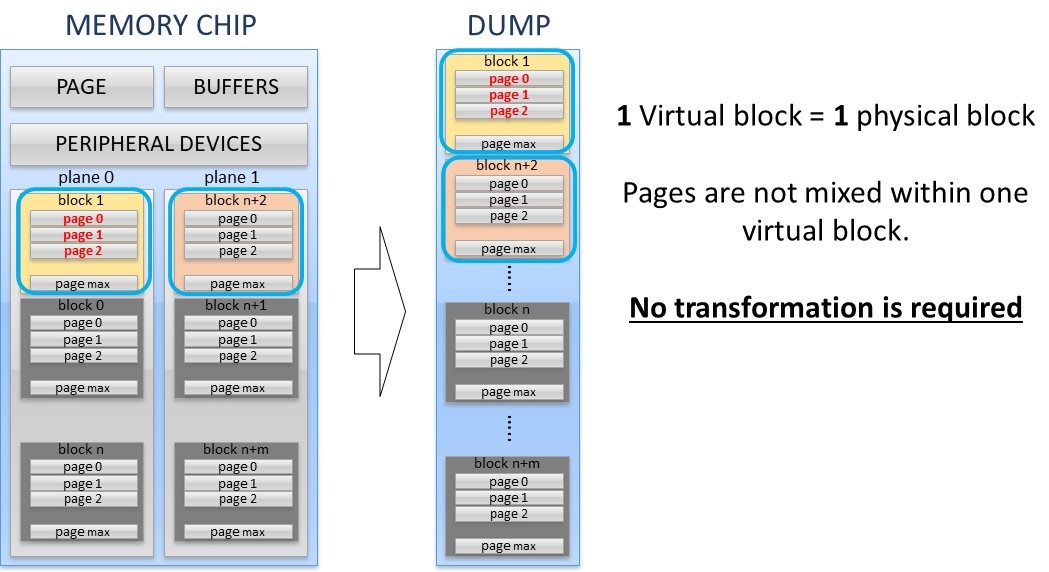 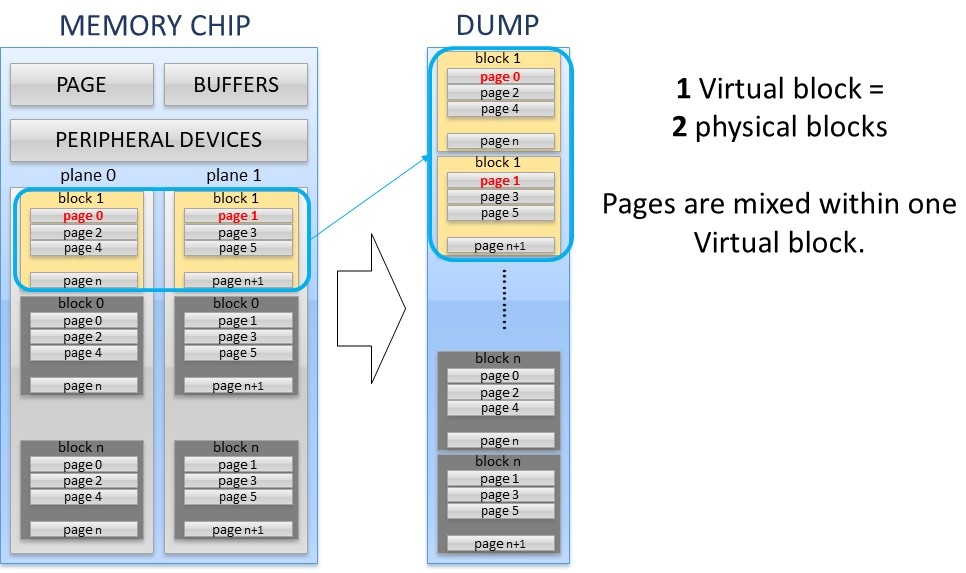 As a result, pages of one Virtual block are mixed in the dump. In this case, it's necessary to put pages back on their logical positions and this operation can be performed with the PAIR element. 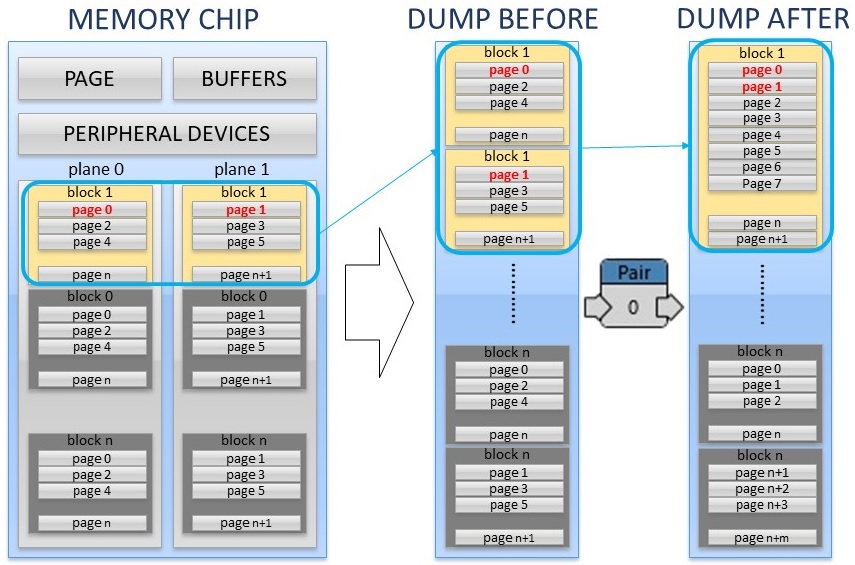 Pair element has a set of parameters that has to be determined:

VNR has predefined Virtual block size which is equal to one Physical block usually, but in case of Multiplane page allocation, it may be necessary to adjust the size of Virtual block. Virtual block size determination and adjustment are described in the article Phison dynamic XOR


One of the methods to d istinguish whether the controller used MultiPlane Page allocation or Single Plane page allocation is data pattern analysis which can be done via Bitmap Viewer. In this method, it is important to find a proper block which has a characteristic pattern and then according to this pattern to detect which page allocation scheme device was using.

Pattern analysis should be performed on unXORed data, otherwise, it will be impossible to notice patterns.


Single plane page allocation has a pattern of data, that was written sequentially, looks continuously from the beginning of the virtual block to the end of it, neighbour blocks have different patterns and LBN's. In this situation,  it's not necessary to apply Pair element. 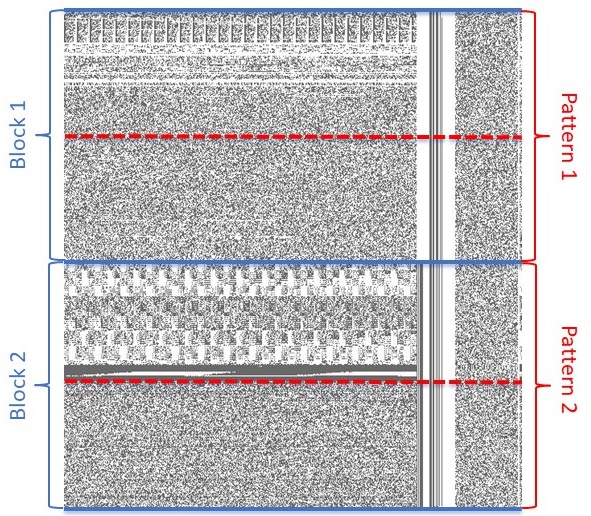 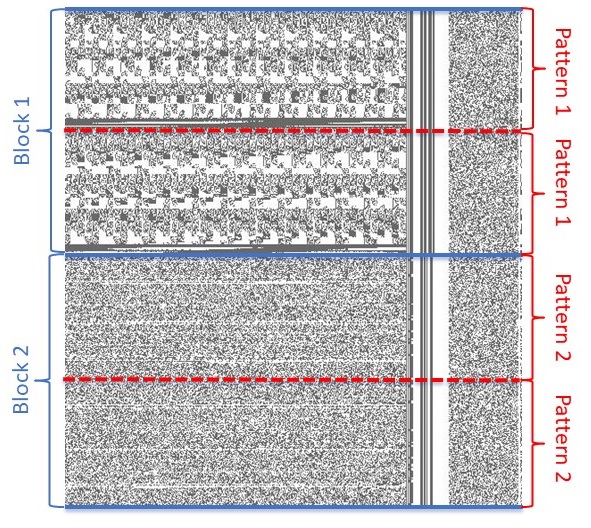 In a situation when a crystal has 4 planes, there are 4 physical blocks with a similar pattern and the same LBN's within one Virtual block.

The duplicated pattern is the effect of parallel page allocation, it occurs because pages of one portion of data were recorded simultaneously into two planes, therefore two physical blocks have comparable patterns.

Devices that consist of more than one chip or single chip which has more than 1 crystal might have more complex Page allocation.


The example below shows multi-plane page allocation in case of two chips with two planes each. In this situation, pages are recorded one by one to each plane of each chip.


In such cases to reverse Multiplane page allocation, it's necessary to connect  PAIR element to each dump at first. By performing this operation pages in the first dump (first chip) will be deployed as following (0,1,4,5,8,9...) and in the second dump, it will be (2,3,6,7,10,11...).  So after this transformation, the first dump has two pages go sequentially and the next two pages are located in the second dump. Then to create a dump where ALL pages are located in the correct order, it's necessary to unite two dumps by two pages. This action can be performed with the  UNITE element. 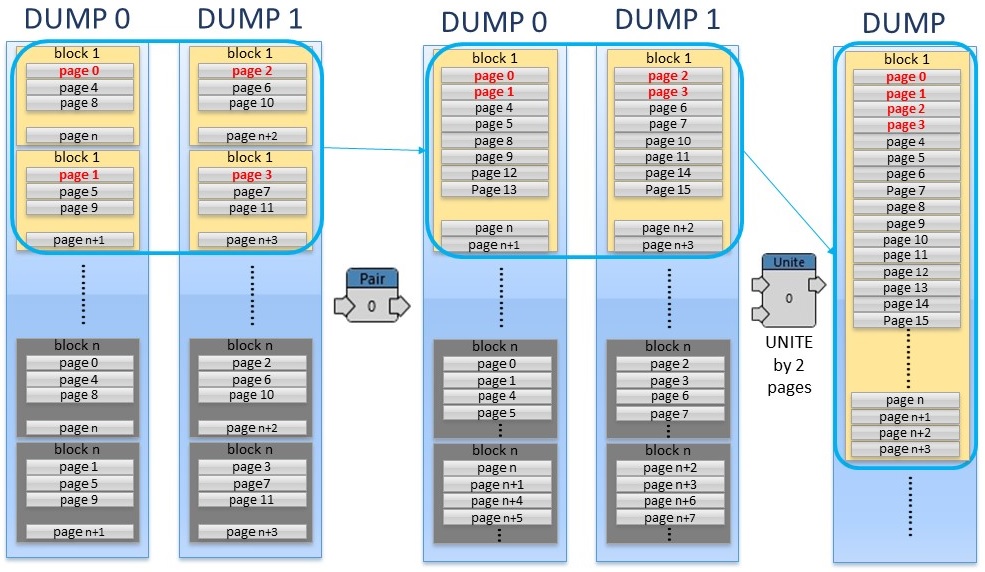 If chip consist of 4 planes Unite by 4 pages should be performed.

To detect if Unite by 2 pages should be done, it's necessary to analyze data patterns or LBNs from both dumps by the same offsets.  Navigation group in ' Side by side' mode is very helpful here.  The same  patterns of data by the same offsets  are the effect of parallel data writing into both chips.

So if similar patterns on the same offsets are found, like on the example below...

UNITE  by 2 pages is required.

If blocks on the same offsets have a different pattern and LBN's, then data wasn't written simultaneously into the memory chips. Then it is necessary to UNITE such dumps by dumps (JBOD like),

The example below represents the case with 4 chips where data was written simultaneously into every two chips and continuously into those 2 pairs of chips.

It is visible by similar patterns of data within the first two and second two dumps. At the same time, the patterns of the left and the right pairs of dumps are different.

According to this, we can distinguish that at first, it is necessary to UNITE the first two and the second two dumps by 2 pages. And after that, the results have to be UNITED by dumps.